Today I’ve finally felt strong enough to cremate the remains of my oldest friend. I fed him into the broken remains of the solid-fuel stove in the living room and touched a flame to his hem. The draught up the chimney was strong. He burned well and he burned brightly.

Big Ted wasn’t really all that big – if he could have stood he’d have been about 18 inches tall – but the name suited him. He was the biggest of my teddy bears, and he was the patriarch of what was once an extensive family of stuffed animal friends.

Objectively speaking, that visage was probably quite expressionless. His glass eyes, the colour of amber, were round and without lids or eyebrows. The nose he had in the early days was, I think, a pre-moulded plastic blob based on a dog’s. He never had much of a mouth – an inverted Y stitched onto the cotton fur-fabric.

I was born late in 1962 so I’m assuming Big Ted was called into being a few months earlier in that same year. In all of the intervening 56 years I don’t recall ever having seen another teddy bear looking anything like him. I’ve never even seen a picture of a clone of his either. He has been as unique to me as my own mother.

A Big Ted could never be created for sale today. I doubt whether his yellow-brown fur was flameproof – there was no evidence of that in the roaring stove today. He was also densely stuffed with straw and rag-fluff. His joints appear to have been discs of dense cardboard pinned together with metal spindles. Those beady eyes were held in place with hooked metal spikes which would occasionally come very close to being plucked out and lost – they would rightly be deemed a combined choking and stab hazard in today’s First World. Deep in his chest was a mechanical sound generator – a plunger and reed arrangement in a metal box that let him growl when he sat up. That stopped working so long ago that I can’t remember his voice.

For almost all of his life he wore the same yellow cardigan. It had been knitted for me as a new-born and when I grew out of it, it was passed on to him. The sleeves had to be ruched up so that his paws could poke out the ends, but it perfectly fitted his barrel chest.

He was well loved, and as the years went by, most of the fur had got rubbed off him so he was left with a sort of rough yellow canvas skin, except where that cardigan protected him. All through my childhood my mother ran a series of repairs on him. The pads on his paws and feet had worn out and been replaced by patches of dark brown suede. His plastic nose had split so she folded and stitched some dark leather into the semblance of a replacement. His eyes which kept threatening to fall out were, I think, given holding stitches through a loop in the metal spike to make sure they stayed in place. The inside faces on the soft fabric cups of his ears were also replaced. There was as much of my mother’s creativity in him as there was of the original designer’s.

As a small boy, I imbued my sizeable tribe of teddies with great personality and sensitivity. I talked to them all the time. I felt guilt when I had to leave behind all but one when I went on holiday. In bed on winter nights, in an age when we’d be pinned to the mattress by layers of heavy blankets and frost on the inside of the window was still commonplace, I would carefully arrange them down both sides of my body so that every one could benefit from my body-heat. When I got up and made the bed, I’d sit all my teddies in a pyramid on the pillow, leaning back against the headboard where they could watch the comings and goings of the day. Big Ted was the centrepiece around which the rest would be arranged.

As I grew into and through my teens, the role of the teddies fell away to the periphery, but I was never able to throw or give them away. I knew in my mind that they were just loose arrangements of cloth and stuffing made to look like things living, but I had spent a lifetime with them always being there, so they had gravity… soul. I had cried with them when things got too much for me. They’d been active participants in every childhood Christmas morning, watching attentively as I wrestled Matchbox cars and yo-yos out of my Santa sock. And they’d been confidants during the times of domestic turmoil that made my unconventional childhood broken and relatively nomadic. They were a constant around which I could build some stability, Big Ted more than all the others in that he had been there right from the cold November day I first drew breath.

He moved with me when I got my first job and my first home away from home. He’s been my companion through the peaks and troughs of my adult life too. He wasn’t safe or indeed robust enough to be placed into the hands of my own children when they were young, so when my marriage ended and I moved out, Big Ted came with me.

He has mostly been sitting on the tops of wardrobes or shelves at the various places I’ve lived since then, watching the comings and goings as he used to do with his pals. He didn’t take up much room and I was never embarrassed by his presence in my home. I still felt that he had life in him. Words would be said to him as I arranged things around him or I had to move him. The weight of guilt I felt when one of my former pet dogs got hold of him and chewed one of those ears ragged, moved me to tears.

And so Big Ted ultimately came with me here to the crofthouse I rent in the wild countryside of the Shetland Islands. It’s a lovely spot, but draughty and chilly in the winter and there’s an ongoing battle with damp. He was tucked away in a quiet, dark corner. I’d been here for a decade before I decided to go travelling for a year to try and deal with a rising tide of melancholy that was threatening to swamp me. So I had to pack up the house contents for anyone else who would be moving in while I was away. That was when I discovered that as Big Ted had been sitting there quietly, he was being eaten away by damp and mildew without me noticing. 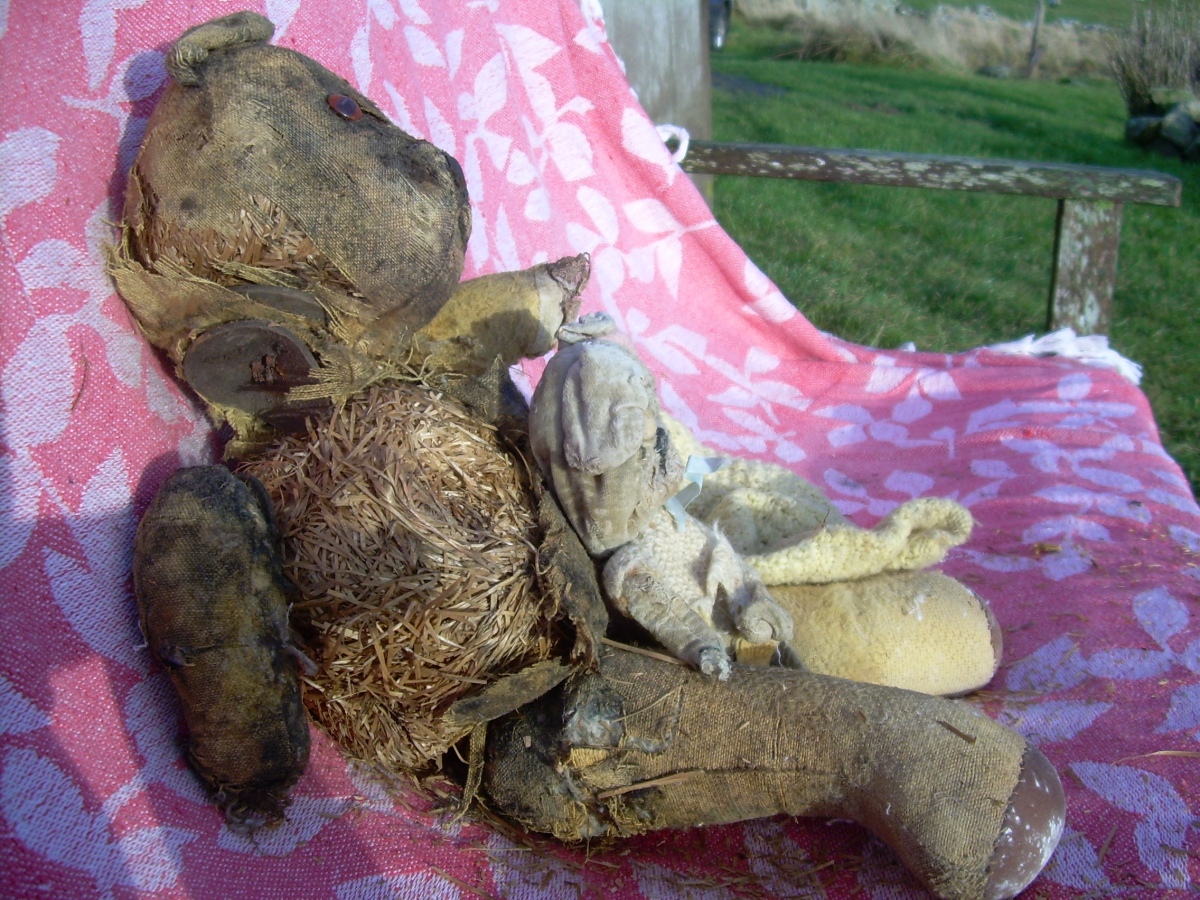 As I picked him up he collapsed in a rustling crush of straw and blackened, damp cloth. His face looked up at me from my cupped hands as his body just fell out of the bottom of his cardigan.

I was in a vulnerable state of mind at the time, and his demise hit me hard. I deflated to a heap on the floor beside him and sobbed and sobbed and sobbed, trying to stuff straw back into his jumper and to rearrange his limbs into the places where they should have been. It was useless. There wasn’t enough left to repair.

When I left the house to begin my travels, I was still unable to bin, bury or burn Big Ted’s remains, so I propped him up beside a couple of other old toys amongst the things I was leaving shut away in an upstairs room. I drove away without him.

I’m back now from my travels, and feeling stronger, but one of the people who had been in the house during my absence had gone into the room of my belongings and swept Big Ted into a plastic shopping bag, tied the top and stuffed him into a corner. I can’t complain. Without knowing his story, he will have just looked like a liability, a pile of mildew waiting to spread, an encouragement for the mice that come looking for bedding. But it was a sad end.

I would have cremated him as soon as I found him stuffed into that supermarket bag, but in my absence, metal plates on the stove in the living room had been broken so that option wasn’t available. However, today there is a strong wind coming in from the Atlantic and the draw on the chimney is so strong that it’s sucking air in through the holes in the stove. That means no smoke generated in there would be able to seep into the house.

Watching the flames take the remains of Big Ted’s head, I see sparks fizzing along the straws in dense, running patterns. They look to me like memories, tracking along the branches of his mind as they blaze bright for one final time before they fall to black dust. Memories of watching me from child to adulthood, through my house moves, relationships, parenthood, troubles and to my depression – the time in which I failed him.

I’m glad I didn’t cremate him before he’d had a chance to witness, through those old amber eyes, my first substantial steps on the road to redemption.

Big Ted’s final roar has been up the chimney. His ashes have now gone cold in the grate, and his smoke has been swept off over the hill towards the North Sea.